The Coffee table was one of the first woodworking projects I had done for the family lake house in quite a while. I decided to make the entire table out of cedar. The legs and bottom shelf supports are 2x2 posts, the table top supports are 2x3s and the table top is 1x3s. I used dowels, glue and some finishing nails to put the table together. After a year of use, I also added some screws to the bottom shelf for stability. We use the table every weekend and we do not bring the table inside until it is time to close the house for the winter. The top looks a little raw because it was recently power washed after it became dirty from cleaning the deck. Pictures are below: 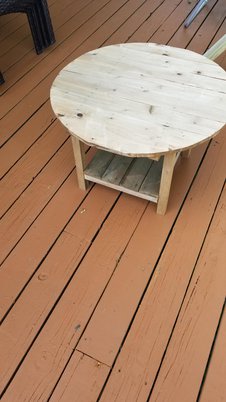 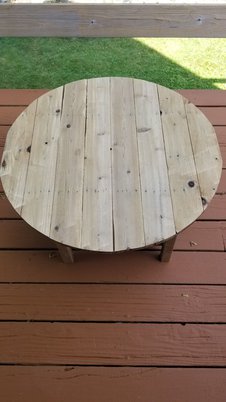 When I was growing up, we had a porch swing on the downstairs porch of my uncle's lake house. I remember swinging on that swing for hours when we went to my uncle's lake house and loving it. When the swing finally fell apart, I wanted to replace it with a nicer one. The old swing was cheap and square and used to hurt people's legs if they sat on it for any length of time. So I looked for plans to build a nice cedar swing that had a rounded back and seat and kind of found one. I had to modify it a little but thought it was workable. The plans called for using both 1x1 cedar squares and 2x1 cedar planks for the seat and back area. I modified that to all 3x1 planks to make the seat look nicer. I had to crosscut some of the planks to fit around the curves. I used cedar for the arms and pressure treated wood for the support pieces in back because I could not find cedar planks available in 2x6 or greater sizes. The plans called for making the support to attach to the deck above out of rope , but I had real trouble with rope so I modified that to use chain. Rope looked nicer but the knots and clamps did not hold up to outdoor use. Chains worked perfectly.

The total build time for the swing was a little over 30 hours including cutting, assembling, sanding and finishing. Below are some pictures of the swing installed at the lake house with one year's worth of color. 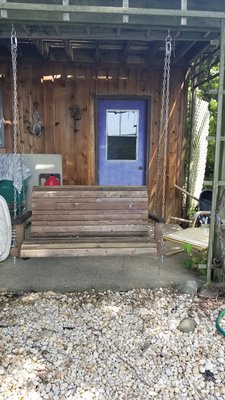 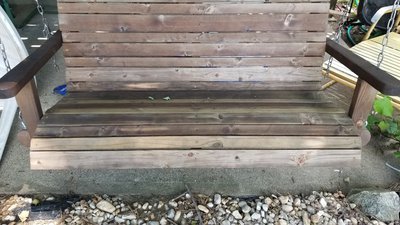 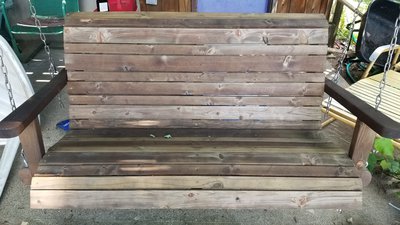