In January 2018, I went on the ski trip of a lifetime. My first time skiing outside the United States and Canada was a 2 week trip to Niseko and Hakuba Valley Japan. To get to Japan, we took a non stop flight from Newark to Tokyo. 13 hours on a plane is about my limit for sanity. I took some sleeping pills as we boarded the plane and was asleep within 25 minutes of takeoff and got a great sleep on the plane, only to find out that we still had almost 6 hours left on the flight. Luckily there were some pretty good movies on the plane (Thor:Ragnarok, 3 Billboards, Star Wars) which helped pass the time. Once in Tokyo, we literally picked up our luggage and ran to the train to get to the next terminal where we dropped off our bags and ran right onto the plane. 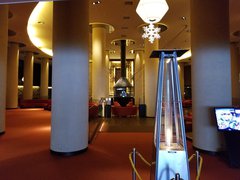 Not too bad if you have a family of four, but we had 24 people to arrange to get to another terminal and check-in. Airlines were very accommodating to give us train passes for free and held the plane for us as well (We were half of the 50 people on board). Niseko is on the island just north of the main island so the plane trip was only 1 hour but after a 13 hour plane ride on a nearly full plane and 45 minutes of rushing in the airport, we were all very happy to get to the half full plane where we could stretch out. Once we picked up our luggage, it was 45 minutes to our hotel. Skiing was phenomenal in Niseko. 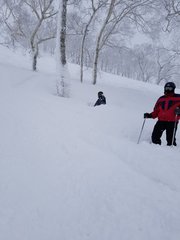 It snowed every day, 45 inches of snow in 4 days and the snow was the lightest, fluffiest snow I have ever seen. We skied all 4 days in Niseko and an additional day in Rusutsu. Niseko was new powder every single day, some days though it was still snowing in the morning and was a little difficult to see. Rusutsu is an upscale ski resort and was very wide and actually had both up mountain lifts as well as peak to peak lifts since the resort spanned 5 peaks across 2 major highways. The skiing here was very good. All of the skiing was on groomed slopes and conditions were very fast, which is how I normally like it. Loved skiing here and if I get the chance, I would love to go back to Niseko and Rusutsu. 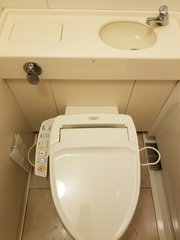 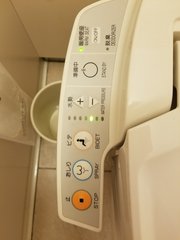 Japan is pretty interesting because many places are totally consumed with cleanliness and technology yet some places just a couple minutes drive away have squat holes in the bathroom.  All 3 hotels we stayed at had Tech toilets in the rooms.  The picture to the right show the controls. Besides having a bidet, the seat had a warmer.  Warm toilet seat on a cold morning? Ahhh!  So nice.

View from our room. 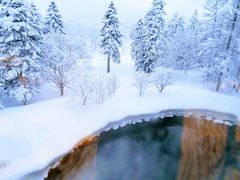 Looking down on one of the Onsens in the lobby of the Hyatt Niseko. The onsens have many specific rules associated with them including the requirement to shower and scrub (hard) before entering the onsen.  Yes, there are people in the shower ensuring that everyone showers and washes properly.  Shoes also have to be worn into the locker room but then need to be taken off before entering the actual locker room so as not to contaminate the locker room floor with outside dirt. 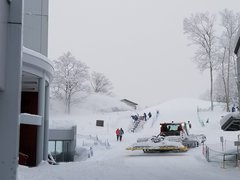 The picture here shows the snow cat coming in early in the morning.  The 4 days we were there, Niseko received 45 inches of snow.  Everyday the snow was fresh, light and fantastic. 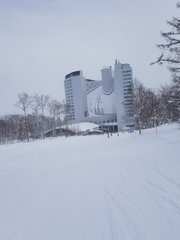 To the left is a view of the Hyatt Niseko from one of the slopes. Each morning and night while eating in the dining room, we were greeted with a view of Mount Yotei which is an extinct volcano and the tallest mountain on the island.  Most skiing in Japan occurs at lower altitudes since they get so much snow.  We never skied above 7000 feet while in Japan. 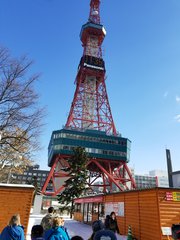 Our last day on the northern island was a day trip to Sapporo the week before the world famous Sapporo winter festival. The Festival is a 3 or 4 day winter festival featuring huge city block size ice sculptures, games, ice skating through the streets and a snowboard jump competition that jumps over one of the city streets. See photos below in my album link below.

One of the massive ice sculptures requires a dozen people, artists working on it for weeks.  The Sapporo TV tower is the tallest tower in Sapporo and provides a great view of the city.  Besides the ice sculptures and tower, we found a huge arcade with an awesome drumming game which was a mix between Guitar Hero and Dance Dance Revolution.  The arcade also had hundreds of claw games with everything from candy to cell phones in them.   They also had apple flavored KitKats. The story goes that each prefect of Japan has something that they are very proud of.  For some it was apples, others it was oranges or peaches or green tea.  Well KitKat thought it would be worth it to make the candy using the locally prized food.  I saw KitKat in Apple, Orange, Peach, Green Tea  and wasabi flavors and supposedly there are quite a few more including Tuna flavored.  I tried most of them and they were all pretty good.

I would love to actually see the Sapporo festival one day but unfortunately, we had to move on to Hakuba valley and Tokyo. Hakuba Valley was the location of the 1998 Winter Olympics and the skiing here did not disappoint. We did 2 day trip while in the valley, one to the Snow monkeys habitat where the monkeys literally walk over your feet to get to the food and another to a Japanese Whiskey factory that tastes very much like scotch from Scotland because the owner studied in Scotland and Japan and Scotland share similar climates and mosses which gives Scottish Scotch its distinctive taste. If you want to see even more pictures, view this album.  The album also contains photos of the Hakuba snowman creation contest. Hakuba is the ski resort that hosted the Olympics a few years back and the ski lift operators have a snowman contest like no other. Entries included full size Lightning McQueen from the movie Cars, Thomas the tank Engine and more.