So, 2 years ago, we decided to go to a Renaissance Faire in Southern New Jersey and we loved it.  In 2018, we went again and decided that we wanted to be one of those people who got dressed up at Renaissance Faire and this was our first Attempts.  Not too bad.  This was at the New Jersey Renaissance Festival and we still think this is one of the better Ren Faires in the area. 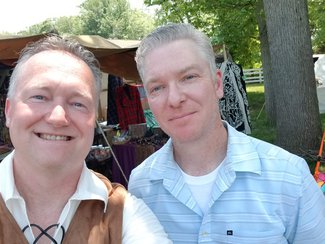 The photo to the right is a picture of my brother Sean and I, during this faire, we converted Sean to be a LARPer.

We have been to the Sparta Ren Faire which was very good as well. And of course there is the Sterling Forest NY Ren Faire which is the big one, but we like the New Jersey one the best because it is a good mix of people, its not too overwhelming and it is located about half way between us and my brothers family so we can meet up and LARP together.

This festival has live jousting with real wooden lances that have been blunted.  Blunted or not, these look heavy and sound like they hurt if someone gets hit directly in the chest with it. The GIF below shows a tiny bit of the action that goes on for about 10 minutes.  The knights are very good and get the crowd into the action.

Also available were whip demonstrations where anyone could try out, and of course, purchase a whip if you like it enough.  There was axe throwing and plenty of crafts for kids.  There were plenty of vendors as well.  Well Sean and I decided that we were not short and coullete men, but we were Kilt men so the below 2 pictures show the before and after transformations and my rewards for transforming.